its a Cake & Coffee kind of day.

Who is with me ? How was your nights sleep?

This saying, "sleeping like a baby"...I don't get it? anyone like to explain this to me? Both my babies have slept erm badly. like Normal Babies?
well with both of my two, they have always slept like babies, up down up down all night, I even 3 years down the line get up with Emilyn a handful of times a week.  she unfortunately is already going through bad dreams fortunately we have only had a handful of night terrors in her whole life, if you haven't experienced them they are awful, i can never calm her down. most nights though she just wakes shouts out for me "mummy, mummy where are you". type thing then i go in ask whats wrong give her a cuddle explain its still night time & to go back to sleep. to which she responds "night night mummy, love you sweet dreams..."*blows me a kiss & back to sleep. some nights though this can happen a few times, exhausting mixed with a Baby waking every few hours.
I must admit something, i was totally spoilt whilst he was a newborn & i thanked my lucky stars. I thought "this is good, I've had no sleep for the past 3 years & now my new baby is sleeping well." well as well as a new born could. he never slept through but with breastfeeding & some nights only feeding him once or twice, i think i was pretty lucky. especially as he had Casts on both legs from 5 days old to contend with. He was a little soldier in my eyes. He could do no wrong. Even when at 5 weeks old he had his first night of Boots & bars "How Boots And Bar has Changed our life" & i had literally no sleep for 3 nights, not once did i get mad or grumpy at Hugo. i felt very upset & sad that this was happening to my boy, but this is just something i had to go through, something that if we didn't go though he would not be able to walk.
Roll on a few months & Hugo is 7 months 2 weeks old... & his sleeping has not improved a whole deal. well much better than he was in his first 3 nights of BnB but he still wakes more than 3-4 times a night. I refuse to go down the CC (Controlled Crying route) I did however use CC with Emilyn & it did work, 3 nights & she slept through. Hugo just seems like a baby baby still, he is crying for a reason,  Hungry, Wind, Hot, Cold, Dirty nappy or Teething.
the dreaded Teething!... oh how i forgot just HOW BAD it can be, i now get flash backs of Emilyn teething at her worst, screaming in pain with no amount of cuddles or calpol to calm her down.
Well i feel i am getting to the stage of Terrible teething with Hugo & i feel this might be worse, I can't even explain how heavy he is with his Boots & Bar on, My Mummy friends with babies with Talipes will know exactly what im talking about. but other mums think to when your baby is having a Painful teething Tantrum & throw into the mix a metal bar & heavy Boots. I literally struggle to hold him, he's like a squirming piglet that i am trying to hold. *i don't mean to compare Hugo with a Pig.
Just trying to get the image into your head. Trying to get Calpol in to him is a whole other story. the mess he makes... i have even tried putting it in to his night time bottle, but guess what he leaves half of it!
so where have we got - Hugo has never been a great sleeper well he was until he had to wear his BnB, But i am not blaming them as this could of just mixed into his teething.... perhaps.
He is a baby. they are not meant to sleep well.
Do i get a tang of jealousy when Mothers say "oh is he not sleeping through yet? X has been sleeping through for months now" yes i do get a little jealous i am however going to cling on to the hope that my  children may be horrendous sleeper now but they will grasp the sleeping all night thing one day. I am also looking forwards to having them as teenagers who never seem to sleep at night but will then sleep all day, to get my own back on them... Hoovering at 7am. I can defiantly do that! Watch out babies i suggest you start to sleep or you'll be very annoyed teenagers !

So I want to know who on earth thought of the term "I slept like a baby" like seriously did this persons baby sleep all the time?
when i say "I've slept like a baby" generally means I've had a shocker of a night.
The silly thing is, even When Hugo sleeps a good night, i am awoken to his constant Boot bashing on the mattress or Bar banging on the cot... he rolls side to side all night, i know he is struggling to get comfy, but his boots are all he knows for night times, although he does nap in the afternoon without, so he does know there is a life without them.

How i am still functioning as a Mummy, house cleaner, cook, wife, maid, you say it its me.
and We never get a DAY OFF i need a day off but if i did... guess what i would think/talk/worry about... yes my Babies. So i wouldn't even appreicate a break away.
I would say roll on the next few months but i am no way wishing away any more of Hugo & Emilyn's life i regret wishing away the 12 weeks he had in full time BnB.
I will just get up & get on with my day like normal. 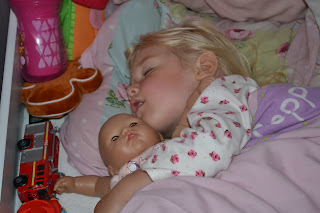 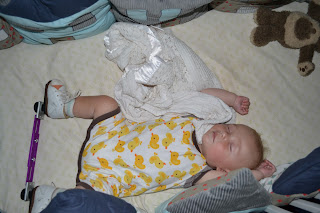 Isn't it amazing how at peace they look, I love watching them sleep.

Take a look at this Blog :

Sleep is for the weak... Blog post - Life, Ninja Killer Cat & everything Else