Yes my child is different

Talipes? Boots and Bar.
My son is 8 months old. He wears his boots and bar nights & naps only, he has them put on at 6pm off by about 11am (he keeps them on until he has had his first nap)
so with the hours he wears them not many people see him in them. The school run is about it,
I have come face to face with the ugly side of people the rude comments the staring the pointing ect i have done blogs about this before.
Well yesterday i decided to take Hugo out all day in his BnB (Boots and bar)
we had the morning at Toddlers & then went on to Tesco's.
It is such a bizarre feeling i seem to build myself up to fall? I don't want any negative comments but i seem to expect them.
Perhaps this is so if i get any thing negative thrown at me i deal with it better?
But the outcome of yesterday's experiment was great. I had the toddlers very intrigued touching his boots touching his bar asking questions. I got chatting to one of the mums that knew Hugo wore them but wanted to know more information how long he has to wear them for & why?
I had lots of smiles from mums that i haven't met before, Now that could of just been nice 'hello smiles' rather than 'sympathetic i feel sorry for you smile'
saw our Health visiter had Hugo weighed the health visiter knows about Hugo's Talipes but even she was interested in our routine with them.
*Hugo weighed in at 19lbs3 hes on the 50th centile.
& a very good eater - i love baby led weaning the best thing i ever done for Hugo.
Sorry going off track....
yadda yadda yadda - left Toddlers went on to Tesco's with the boots on Emilyn & Hugo shared a trolly & again the reactions were minimal.
I honestly think a lot of it has to do with my happiness - i know recently my emotions have been all over the place. well yesterday i walked around with my head held high, & it helped, all the starring i didn't take to heart any whispering i blocked out.
more than anything people look at it with questions the "why has that baby got boots on with a metal bar"
yesterdays experienced has helped me. i feel so much more relaxed taking Hugo out in public with his boots on when i need to. 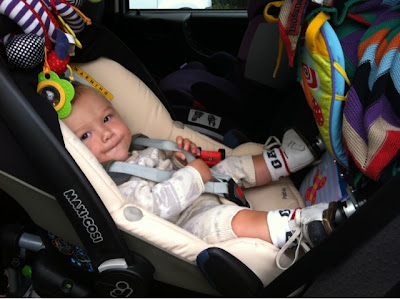