Where's My Grandad? In the eyes of a Toddler

*Warning this could be a sad one*
This could be a bit Taboo for some of you, But I decided to take my Babies to My Grandfathers Funeral take a look at my blog post To Celebrate Life.

Mummy has let me use the Mac today as we are all poorly & i'm on antibiotics, She asked if i could express my views about my Grandad being up in the sky, he is the brightest star on the darkest of nights.
My Grandad is infact my Great Grandad but I just call him Grandad - As we drove up to Norfolk on sunday i was getting so excited to see my Nanna & Gran & Grandad, i said to Mummy "I have 2 Grandads  One with black hair & One with white hair," Mummy just smiled at me though. I know she has told me that my Grandad has gone to the sky But i still didn't fully understand. i mean c'mon i am only 3!

We arrived in Norfolk in quite good time Hugo & I had begun to feel incredibly poorly We had stopped off in Mc Donald's but neither of us wanted to eat & lots of people starred at Hugos BnB, he had to wear them all day because Nanna had him the night before & he didn't have his BnB on for the whole night anyways - so Mummy had a Coffee with Grandad whilst Hugo was sick everywhere & i just sat there moaning feeling very sorry for self,
When we got to Grans house I went searching for Grandad again I could see many pictures of him in the Lounge & dining room but i couldn't find him.
"Grandad where are you?" I shouted.
Mummy then decided to sit me down & try to explain again that he was gone & we will be saying a goodbye to him on Tuesday.
"I love you Grandad" I said up to the sky & i blew him a kiss.
We spent all of Monday with my Uncle Ryan & Becca I love them lots & we played lots of games But Hugo & I felt even worse so we also slept a lot on that day too.
Daddy & aunty Emma Arrived Monday night too.
Tuesday Morning came Mummy said "we are off to a church today"
"Yay church I love church"
Hugo & I were still incredibly Poorly so Mummy booked the Doctors for us for when we got home the following day.
Lots of Black cars arrived I love cars they were long with lots of seats but not many people seemed very happy to see them, they were crying, Mummy tried to explain to me that Grandad was in the first Car but i couldn't see him.
We walked in to the church whilst everyone looked round at us we followed the big wooden box.
I cuddled Daddy & held him tight till we sat down in a pew at the front of the church, They put the wooden box at the front of the church. all i wanted to do was sing... the priest spoke too much i said to mummy "When can we sing?"
she smiled again & said soon.
Then i could see tears rolling down peoples faces. I really couldn't understand but i went round to give my mummy a cuddled.
I think the service went well. I think i made people smile.
My Aunty Emma & my Nanna got up & spoke at the front of the church. My Nanna read a Beautiful poem of "No Man is an Island" this poem will now be very special to us all.
Once the service was over they picked the big box up. (I've now been told its a coffin with my Grandad inside?" this scared me a little... I thought Grandad was up in the sky?
We walked round the Church to the back where there was a big whole they then put the coffin in the ground. even more people Cried, My Mummy was being strong for us she knows i don't like to see her sad.
My Gran then told us all to get into the car as it was bitterly cold & we where all poorly My Mummy was really poorly too by now. we went off to a lovely Hotel to have food & catch up with old friends & Family. this was lovely but i just wanted my mummy for a cuddle.

In Truth I think i understand my Grandad was old & poorly I saw him in hospital & now he is in a much better place. I'm glad my Mummy & Daddy included us in the day as I would of been forever asking where my Grandad was?
I now Know he is in the ground but his spirit is in the sky with all the lovely people who get to go to Heaven. 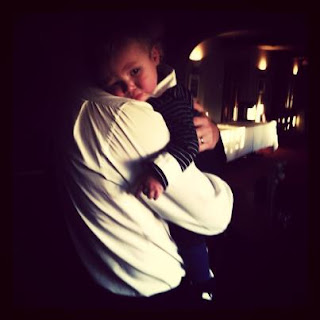 I'll always Love my Grandad & I am so glad i had the pleasure of meeting him.