TERMINATE YOUR PREGNANCY DUE TO BABY NOT BEING PERFECT? 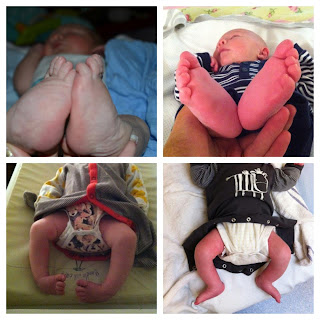 You can read the whole Article HERE


Now as you can imagine this article by the Daily Mail has caused Rife in our Happy Feet Talipes Support group (I created)
After reading the article i am in SHOCK by this...
Does this not tell you that MORE needs to be done to make more people aware of ClubFoot (Talipes)

I want to say "So what gives a parent the right to abort a baby from 20 weeks gestation JUST because it has Talipes or a cleft pallet?" I suppose i shouldn't ask this question because its still legal am i right in saying you can terminate up until 24 weeks pregnant? BUT how can you do this when at 24 weeks pregnant if you have the baby due to early labour the baby has chances of survival? It just all seems totally wrong!!

Then on Daybreak this morning they were also talking about it..  This is what a Mum & close friend of mine had to say as she was in shock...
"On Day Break this Morning they were just talking about Mums who are abortions because there baby has Club foot or Clef pallet, it makes you think if corrective treatment such as Ponseti treatment was more known and understood , would they still make the same decision ? , for me this was never an option, but i do understand everybody's situations are different"

As you are aware if you read my Blog we had a difficult time whilst pregnant with Hugo with us having a scare that he had 'Edward's syndrome' or 'Downs' catch up Here  if you want to read it all...

I can understand how scary it is finding out you haven't got a 'perfect' baby... I really can RELATE but it is just Talipes & its treatable... relatively simply too. they shouldn't need any major operations & they should be like any other child the boots & bar only stays on till he is 5 years old & just at night times.

Looking at my son playing this morning I couldn't bare to think i had terminated him JUST BECAUSE he has funny feet...

I thought we had moved on from....this craziness - read my post here about the horrid man Peter Singer who's views were simply Terminate any child who wasn't 'perfect'. BRILLIANT! what a IDIOT!

Club foot is one of the most common congenital abnormalities, affecting one in every 1,000 babies born in the UK.

that in my eyes is quite a few babies...

I think if more people were aware & had Talipes brought to attention if they had more information & saw MORE babies with Talipes if they could see them progress from Curly feet...casting stage..23hours full time bnb stage for 12 weeks & then 14 ish hours BnB night & naps only... PERHAPS just perhaps more people wouldn't terminate. Maybe they would realise its not the end of the world.

My son Hugo honestly couldn't be happier. Every one comments on how chilled out & happy he is. He is crawling & walking with his walker hes almost 13 months & his feet are THE MOST amazing things in the world.

I have read comments like "So what, who wants a broken baby? - T," Oh T whoever you are you really sound like a guy with VERY LITTLE Knowledge of the world. i truly hope you haven't reproduced & hope you never do. What a Awful attitude.

OK so how do you educate people more? Believe me i am trying to get the word out there...