Good News we are finally HOME.
Hugo's Oxygen levels were ok enough to be discharged but we are not out of the woods yet.
He needs his inhalers every 4 hours even through out the night... it was like having a new born. I relied on the nurses too much at the hospital it seems. Well i didn't but you know what i mean.
the first night in hospital i must of had an hour or so sleep, every flitter i woke to. But the second night i was so tired & Hugo must of been too as they gave him his Nebulisers without waking him. i did wake up every time a nurse came in though... 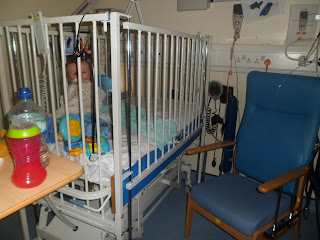 we are back home & i am happy i really am. but I'm totally exhausted. It was amazing to see Emilyn we had the longest cuddle & to see Hugo's face when he saw her was incredible.
The last 24 hours has been a complete mix of emotions - yesterday morning i had no idea we would be home the same day! Hugo was still on the nebuliser & wheezing quite a lot.
But as his Oxygen levels had improved & they got him back on to the inhaler we got discharged.
Today's plan consist of cuddling my babies & watching film after film after film.
I would LOVE to sleep for a 100 hours but Emilyn has informed me that i can't even lay down until her daddy arrives home later tonight.
But this morning consisted of a deep clean of the house & caught up with clothes washing, I had Emilyn & Hugo crying all morning I have a steaming head ache & just ache, i supposed i am literally exhausted, Hugo still screams everytime he has to have his inhalers so that time of the day isn't nice.

He finally got some sleep... In the travel cot i put up in the lounge. 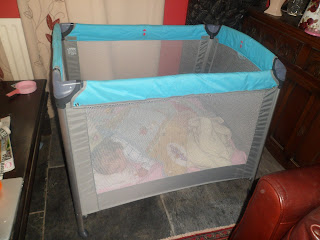 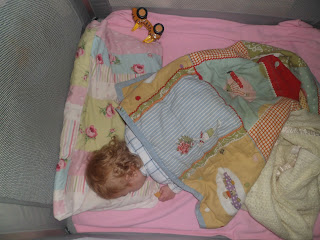 Hopefully from now both little people will carry on improving & life will be able to regain normality.
Posted by busybeemummybex