I was asked if I fancied a Mother/Sister short break away to Italy child free, I of course jumped at the chance. Hugo is over 2 & half years old & so far I've only been away from him one night. It was amazing I treasured every minute of it. I love my children of course I do. However I am with them pretty much 24 hours a day 7 days a week. I needed this break.

5 days to be me. Five whole days that I'm not Mumma.

We started our Trip in Pisa you know the Tower of pisa... it was brilliant to see everyone doing that whole optical illusion stuff with their camera pretending to be holding up Pisa itself... I saw some bizarre things.
The plane journey to Italy was like luxury I could read my book & nap & not fuss 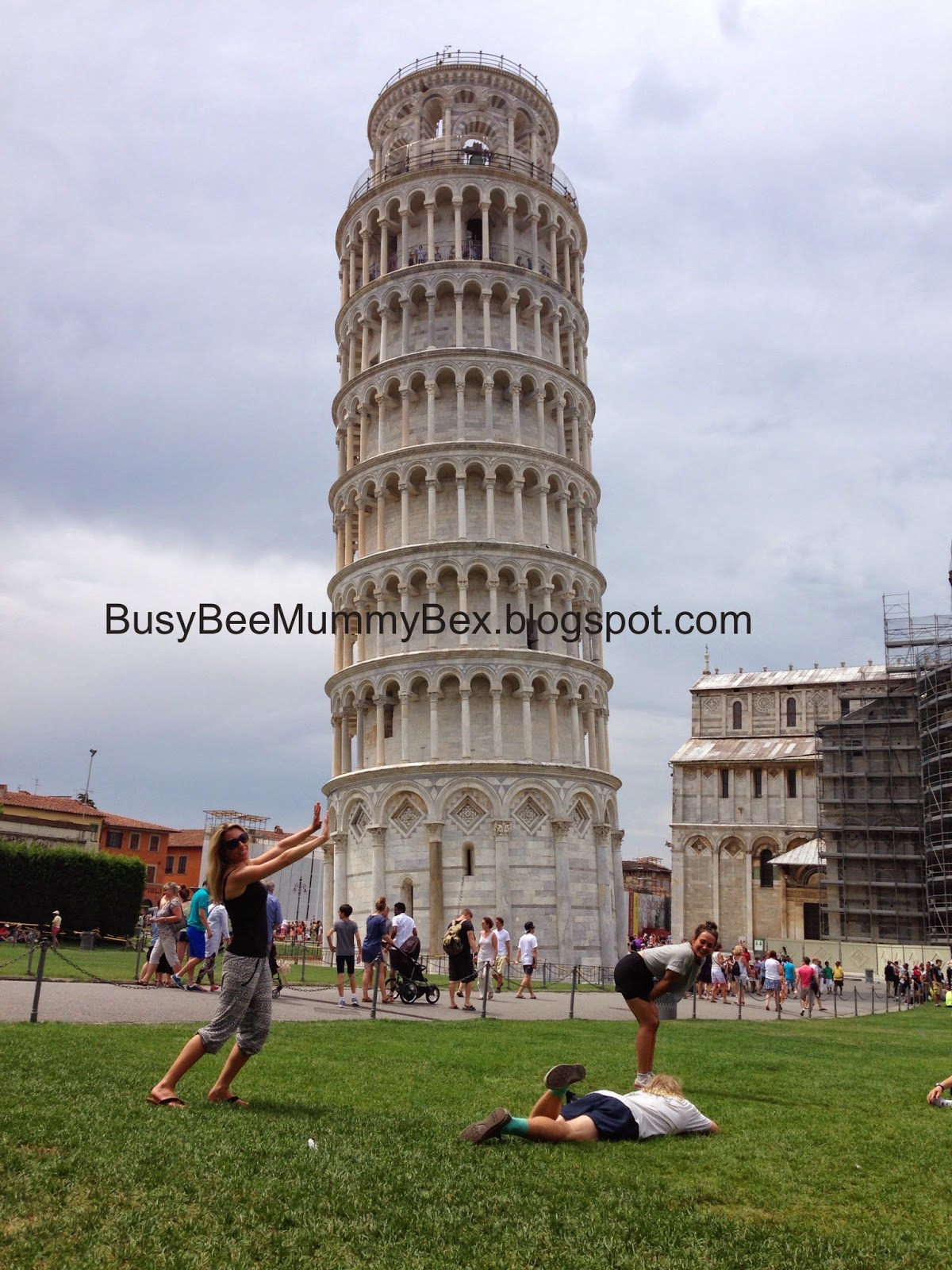 Then we jumped on a train to Florence I say 'jumped on a train' it was obviously all in Italian we did get a little confused & then the train ride itself was erm... interesting the train was packed & we had over an hour journey standing in the train corridor, with what looked like ticket dodging passengers (whist being on some kind of drug)...
Once we had arrived in Florence I was amazed by everything, of the buildings of the scenery, everything was so beautiful so elaborate.
We found our hotel it was pretty basic but nice enough (comfy mattress!!)
We went searching for dinner; stumbled upon this outside restaurant more like a pop up restaurant I suppose, The burgers were by far the most unreal I have ever tasted. We all agreed. Then a huge & I mean HUGE rat ran past... I wasn't too fazed; though I was worried my feet would get bitten. It was quite funny though.

We woke up to Florence almost flooding ok a bit of an exaggeration.... it was raining hard & the roads were flooding in parts. I took my flip flops off & walked bare foot it was so refreshing, It was a little gutting having rain, *Especially as the UK was sunny so typical.

I don't think I've ever done as much walking as I have the past few days. Not that I'm complaining amazingly I coped better than I thought.

We done the whole tourist thing walking looking in most shops, around the museums the buildings all so magical. So far of what I've seen of Italy it has all looked so magical. Almost as if words can't describe it. (You'll have to book your next holiday there)

Our first stop was trying to find the Gucci Museum out of the whole trip this was something I had got most excited over, Reading about Guccio Gucci was amazing hearing he was a lift attendant serving the wealthy gave him the drive to make something of his life. Seeing pictures of Audrey Hepburn with Guccio she was beyond beautiful.
Seeing the Gucci Cadillac I was most fascinated by. Seeing the Gucci in such detail in the seats on the wheels in the stitching.

Walking around the museum seeing Gucci over the years was ah well I felt like I was in heaven.

It was STILL pouring down with rain so it was a no brainer to have lunch in the Gucci cafe with Gucci plates ect ect.

Then we went to Florence Cathedral of course. the queues in this place were crazy... Then we get to the front & this board outside says you can't have short shorts on or shoulders on show. Well my two sisters had one or the other wrong. They weren't allowed in, my older sister put her scarf around her waist whilst my younger sister tied her denim jacket around hers & they were welcomed in only just though.
The Cathedral is beautiful.

The days went so fast yet felt the longest days ever with looking back at the morning thinking it felt like a lifetime ago.

The following day (our last day in Florence) was when I say literally spent queuing for The Accadamia & Michelangelo's Museum for over 2 hours to then just walk away from the que... without ever actually seeing Davids willy. Nope that never happened. We had pre booked our train & time was rapidly running out (Today was also SUNNY) We queued in the shade most of the time....
We ended up going down to Mc Donalds for a wee more than anything Oh & a cheeky milkshake.
I asked for a banana one & when the worker said they have Strawberry, chocolate & mango... My mother's response was... "& by mango you mean???" worker..."I mean Mango..."... Not banana then... no mango... Oh my gosh I so wish I witnessed this although no doubt i would of wet myself literally I really did need a wee that badly & that would of been way too much to not burst out laughing for...

I somehow lost all my written postcards somewhere in between Florence & Venice too. Heartbreaking!!  I had to write more.

The Train to Venice was fab it was modern spacious & we had allocated seats I read (in peace for two hours) then the walk to the hotel once we got there, our hotel was in main land Venice & we had to jump on bus number 4 to get to Venice that we know & love...

Venice was amazing but the tourists were everywhere (I know I know I AM A TOURIST) I'm fully aware of that. Just the hustle & bustle of it all was at times quite over whelming.

Until we got further into Venice the quieter parts were beautiful & we spent our second day at St Marks Square, then onto the Peggy Guggenheim museum. Did you know Peggy herself had Lhasa Apso doggies. (Molly my dog is one)... The Guggenheim was breathtaking I loved the art & the sculptures were out of this world I saw real Henry Moore work ... I love art galleries I loved seeing Andy Warhol flowers up close too!!

Then we went to find St Marcos Square that was probably one of the busiest areas, & lots of pigeons too... people where kneeling down with food on their arms to attract the pigeons to sit on them for a reason my brain can't & won't comprehend .....

The atmosphere was electric.

We had lots of Ice cream, lots of pizza & pasta, lots of walking, spent far too much money & had the most amazing time. A time I will never forget.

Most of all the company I was with was the best we totally laughed more than I laughed in my entire life in just 5 days.

If you want to be nosey you can go find my Instagram to check out some more pictures....

Now to plan where to go next year....
Posted by busybeemummybex