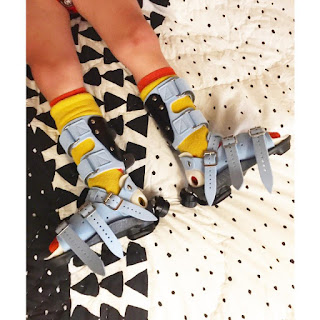 After H broke his boots and bar about two or so weeks ago, all he has been asking about is "when can we go to hospital to get new boots mumma?" I was amazed that he wanted them so desperately.
He's really turned a corner to actually wanting his boots on. He now finally understands how much his feet need them, that he doesn't want curly feet & wearing them isn't as hard as he first thought. (Also these boots ADM boots don't seem to put him through any major pain.) Bonus.
He does still get knee aches and pains, he's hyper mobile throughout his body so I'm aware that his muscles and joints will be in some sort of discomfort more than normal.
I wish I had recorded his little face when unwrapping the parcel that contained his new ADM boots in. He was so excited.
He's promised to try not to walk whilst wearing them, we hope....
They're sturdy boots but these boots aren't made for walking. I think the reason for the past two pairs that have broken are because he walks around the house a lot.
He put them on just before bed & he was so happy.

Here's to onwards and upwards.