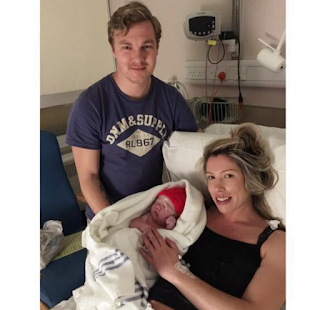 I can't believe Nelly is 8 days old today!
The last week or so has been a bit of a whirl wind if I'm honest....
Contractions started Friday 8th April they were coming thick & fast & painful.
So we went up to the hospital I also had reduced Movements I explained it all HERE if you want to catch up... I was sent home still having contractions late Saturday afternoon.
It's funny because I actually thought I'd be pregnant forever.
Little did I know that when I went to bed Monday night I wouldn't be getting much sleep.
I went to sleep at 11pm just because I couldn't sleep the contractions had stopped, however H woke me up at 12:01am when I got up to see to him I noticed I was leaking all I could think was my waters. So I quickly said to H that I'd be back & nipped to the bathroom (I've never lost my own waters I've always had them broken by the midwife so I didn't really know what I was looking out for) However this must of been my waters.
I put a towel on the bed & went to lay down when more came out.... still no contractions but went to have a bath to relax myself.
Once out the bath I had a gush it was definitely my waters; Mr.H took H over to may parents house (E was already there as she was concerned I would go into labour at night time) How right was she.
My waters just kept going honestly such a weird feeling. I felt fine as well so started tidying up the house & even managed to put some foundation on. Yes I know how vain of me... anything to keep my mind amused though. As I laboured so quickly with H after my waters were broken I rang the hospital to let them know.
They told me to go right away & they'd let delivery suite know too.

Well once in the car half way to the hospital I heard a huge POP sound & more of my waters went, It made me feel so sick. Then the contractions started... OUCH.
Arriving at the hospital Oh my goodness my trousers were soaked through luckily it was 1am & the hospital was so quiet.

Got to the delivery suit & was greeted by the midwife who sent me home Saturday night; I actually thanked her for sending me home & letting my body take control although being in slow labour since Friday was horrific I was just proud my body was able to go into established labour without any help from the professionals.

I asked for an epidural after my horrific labour with H, she examined me & told me I was only 2cm STILL. Devastated. However I was in agony & knew things were changing by the minute.
She got the cannula in my hand to start the hormone drip to get labour quicker (Though she really didn't need to because my body knew exactly what to do) The cannula was never used...

The anaesthetist came in to start my epidural & I was on the gas & air, I heard him question the midwife "are you sure she's only in early labour?) I'm guessing by this point I was about 5cm I thought at one point I was dying; Obvs.
I accidentally moved & the epidural was done wrong *Effing brilliant* He said it had a 50% chance of working & that he would be putting myself & baby at more risk taking it out & redoing it than leaving it in.
Once the anaesthetist had left the room I had my first shot of the epidural I could still feel every contraction but agreed they didn't feel as intense however I felt the need to start pushing. Baby was most definitely moving further down.

About half an hour later I was ready to push baby was on her way & the epidural may of taken the edge off but my god I will never forget the stinging pain of birthing a baby.

I pushed with every contraction & then the alarms went & i had two midwives in with me ready to help with my new baby.
I gave birth to her head... Her head was out! Then my body decided to stop.
Literally contractions stopped no need for gas & air apart from the pain of baby's head being out...
We waited two whole minutes for the next contraction to then be told I had to do it myself.
Oh my god! Thank goodness the epidural hadn't worked so I could feel my body to help me push baby out. They tipped my bed backwards & I done four huge pushes then she was out.
At 04:43am 12 April 2016
They recorded my labour at 2hours 56 minutes (even shorter than H's was)
Nice & controlled & slowly. Of course she was slowly delivered my body must of given birth to her head & thought I had birthed a baby!
She was handed straight to me skin on skin & I got her to latch straight away.
Had the placenta injection but still my body hadn't started contracting again so I had to push the placenta out myself too.

The plus side to this labour was although Nelly weighed a healthy 9lbs8 I got away with no damage.
After H's horrific labour I am so thankful I walked away so lightly this time.
Got up & showered (another good reason the epidural didn't work) Mr.H cuddled Nelly whilst I sorted myself out.

We got taken on to the ward & managed to be discharged the same day by 8pm.
The children came to see us & we went home altogether as a new family of five. 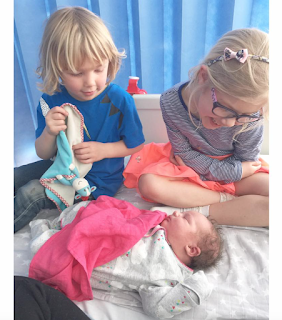 She weighed 9lbs 8 at birth5 days later she was 9lbs 5She was born with dark eyes almost black but we are still undecided what colour they'll become.lots of dark brown hairLong finger nails, perfect face, long fingers and long toes just like her big sister E 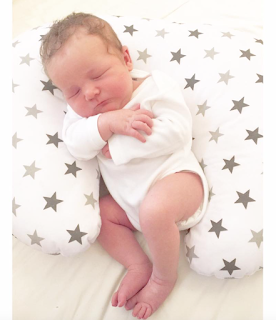