Christmas in the sunshine – We booked the WRONG hotel! 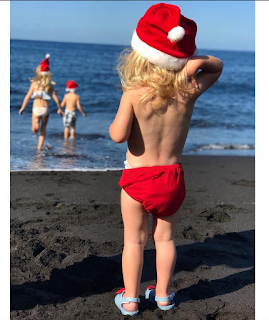 Only we would go away for Christmas with majority of our family and end up arriving in the completely wrong hotel the other side of the island….

It sounds like something out of Home Alone. We couldn’t make it all up, even if we tried.
We luckily had a pretty uneventful plane journey, the smalls behaved well apart from H repeatedly asking his Daddy “if the plane was going to crash and would we die?” Shhh H ssshhhhhhhh H!

Oh and Mr. H apparently lost us all for half an hour at Gatwick airport… he didn’t of course, he decided to buy Baileys but needed my phone with our boarding cards on, can we just discuss why we need to show boarding cards at the airport to buy things? We’ve all got through security ?!?! Any who the smalls were literally running rings around me so I decided to pop my head and body into Cath Kidston ( Favourite shop! ) however I left the older two smalls and our buggy and bags outside the shop so Mr.H could see where we were. He didn’t. He thought we had done a runner *As I would with three small toads in toe. He almost contacted security…. ALMOST. I’m pretty sure we were missing for less than 10 mins MAX!

Once we had landed on the beautiful island of Tenerife, the smalls were pretty over excited and it was getting late (for them and me!) we had ages to wait for our baggage and buggy, the next step was getting our hire car. Something we do a lot, most of our holidays abroad we hire a car to give us that extra bit of freedom, to explore the country. I mean we love a beach day and lazing around the pool… but on a serious note with three smalls us adults don’t get much relaxing, do we? It’s so easy to get in the car and explore.

We started queing at the kiosk. Two couples in front of us. I thought easy this wont take long. WRONG! About 15 minutes or so into standing around the lady told us we had to go around to the other side, as this kiosk was shutting. With three or four families behind us, we had no hope getting our car anytime soon. In fact it took about 2 infuriating hours to finally get our keys. Meanwhile the smalls had been dancing, playing cars, doing racing between us and a Christmas tree the other end of the airport…. I was ready to lose my mind.

Keys handed to us, time to find the car. Felt like another two hours later and car found.
The car was in awful bodywork condition. We couldn’t believe it. The bonnet was so damaged the open bonnet sign was on. Mr.H ran back to the Hire car kiosk to make sure they are aware of the damage, she assured us we were in fact covered for any damage and the car is safe to drive…. Blah blah blah.

Smalls in the car we had an hour and a half to drive to the hotel. Cheeky stop off at Mc Donalds as we all were starting to get Hangry!

Arrived at the Hotel we thought everyone else was staying at, It was 10:30pm, traveling all day we were totally ready for bed.
Phoned Sister inlaw and told her to knock at room 303, couple of minutes later door knocks, oh
must be sister inlaw…. Nope it was the lovely receptionist with our hair dryer and remote (€20 for the privilege  of using the TV & drying my hair)

I left the door a jar for my sister inlaw, she couldn’t be far away…. How big is this hotel?
She rang back telling me that she was knocking on the door!. Oh god. Is there other buildings? Mr.H asked her to go to Reception and stand by the Christmas tree. Yep she was, but so was Mr.H! He asked the lovely Receptionist if there was any other buildings or another reception? Nope. Was the response. Oh my god! Where are we?
They put find my iphone app on. Sister inlaw OH MY GOD You're over an HOUR and a half away! WHAT!?
We had booked the Hotel on the north side of the island. EVERYBODY else had booked the same hotel chain but on the correct south side of the island.

I honestly felt like we had been in some kind of sick prank! What were the chances? It’s absolutely ridiculous. This was meant to be a relatively stress free Christmas away. Spending quality time with the family without a huge commute. However we are a positive family. We will make this work. The following day we set off in the car… through the scariest mountains, remember we were also in a car that felt like it may fall apart at any moment. The journey was like a rally track with no road crash panels and steep drops with tarmac falling away from the road, smalls in the back singing to ‘cause baby you're a FIREWORK!’ whilst Mr.H is concentrating trying to stay on the road. It took over an hour and a half. I clung on to the door handles with my life. Sounds crazy dramatic now but at the time I was in a blur of stress, sleep deprivation and worry.

We spent the morning at beach and met up with everyone at their hotel afterwards.
We managed to get a lovely apartment from bookings.com next to everyone's hotel, It was so nice to go out for a meal with everbody and not have to drive the 2 hours back to our original hotel.
Christmas day was fantastic and the children behaved beautifully.

I would definitely spend Christmas away again. The children had a few presents but the main thing that excited them was spending time with family, isn't that what Christmas is all about?

You can keep up to date with us over on Istagram - bex.waight