Is by far the worst kind.
It all started after Hugo had his bath I then put his BnB back on as normal & started cooking dinner Hugo then started crying so I tried to burp him thinking it was trapped wind as he can get in quite a bit of pain with it. It was a cry I hadn't heard before a painful cry. I tried to feed him again but was just latching on & off then sicking it back up again. I had my dinner whilst rocking him. He's still crying he hadn't been like this since the day he was in his BnB for the first time. I cleaned up the kitchen whilst holding him ( quite hard one handed)
Then took Emilyn up to bed whilst Hugo is still crying. By 9pm hubby came home from work I had been rocking Hugo for over an hour I had tried Calpol, teething gel, Infacol, I just didn't know what was wrong thinking he may be teething or colicky. Mic took over trying to calm him down he was exhausted!... The night went by extremely slow. Clock watching wanting it to be 6am so I can get up & grab a coffee. I had to sleep sitting up in bed rocking Hugo I was non the wiser to it being anything to do with his boots!
He's been in them fine for about 8 weeks. I untied the boots invade I done them up too tight but no he was still crying still in pain.
I felt totally hopeless I wanted to take the pain away.
At 7am with no sleep I decided to remove his BnB & to my horror I had caught his baby toe on his sock awkwardly. I just burst Into tears I his mummy had caused him to be in such horrendous pain how could I of not known?
I honestly felt like the worst mummy in the world. His poor little toe all red & hot. As soon as I took his sock off he completely stopped crying & put a huge grin on his face. This is how I knew 100% it was down to his toe.
A whole load of guilt swept over me. My little 11week old helpless baby in pain.
I had only just started feeling confident with him in his BnB & now I suddenly dislike them profusely. It feels as if I've taken 3steps forward & 5steps back.
It's hard enough coping with colicky babies. It's hard enough dealing with teething. But I... Hugos mummy added my own hard work & made him in pain at the same time. I just couldn't stop crying. All day today he's been fine he has no idea I just keep going over it. Tears keep swelling up in my eyes & I have to wipe them away.
I've now lost all confidence in the BnB its taken so long to build it up for it to be knocked down so quickly.
I've never felt so awful.
Hugo himself now knows no different & doesn't seem effected by my traumatic experience. Although in expecting his toe this evening it looks very bruised & sore. I tried to call my physio but no answer. I just hope it's not caused any lasting damage.
I'm now off to sleep as last night we had none.

This is Hugo this morning totally unaware of the previous problems of last night. 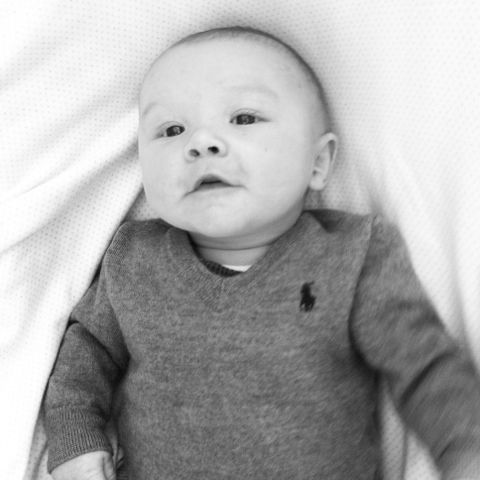