When Hugo was born late Saturday night he didn't feed much just slept all night & all the next day I probably managed a 5minute feed if that. I got asked if I was feeding ok & as I hadn't had much of a problem I said yes fine although they didn't check, once we got home it was a bit of a faff trying to get him to latch on but just put it down to Hugo just being sleepy & not knowing what he's meant to be doing. Over the next few days I became extremely sore Mic got me Lanish Nipple cream to help me I again just thought this was normal. I thought I remembered being in that much pain whilst nursing Emilyn in the early days. One morning I was sitting in my lounge looking at my beautiful new born baby & took a glimpse at his tongue... It was very short whenever he managed to stick his tongue out the tip went inwards almost like a snakes tongue - the best I could explain it as. I called Mic over to have a look I wondered if all baby have tiny tongues like this... But couldn't remember Emilyns being like it do I said I think He's Tongue tied!
Everyone around me tried to reassure me, told me it was fine & he would grow out of it even a Doctor !
Once Hugo was around 5 weeks old I mentioned to my Mum that it was still very painful to feed him almost as if he was chewing on me the pain was excruciating bringing tears to my eyes with Every feed.
I went to see another Doctor the following day at Hugos 6week check, she agreed he was indeed tongue tied but I needed to see my Health Visitor to be referred. I was pleased someone else agreed with me & I wasn't some hysterical Mother over reacting on things... I just wanted him to have it snipped as soon as possible but now I needed to make an appointment to see the Health Visitor.
By the time we got to see my HV Hugo was 6weeks old. She also agreed he was tongue tied & needed it snipped but asked why this wasn't done once he was born in hospital. He slept so much he didn't let them look in his mouth so no one knew. She then also explained that my Doctor needed to refer Hugo to our local Hospital! This was becoming a joke. Talk about being pushed pillar to pillar!
Once I had a appointment with my Doctor & Hugo had been referred it was then just a waiting game.
A game that I waited & waited until a letter came through the post explaining the plastic surgery department was fully booked & they will get back to us! I was fuming to say the least, all I wanted was to feed my boy without him getting cross & me being in pain.
Hugo is now 13weeks & 4days old we received the phone call today for his appointment to see a consultant about his tongue by this time he will be 4months old... It's been made for May 9th the exact same day Hugo gets to go down to 14hours in his BnB. I have no idea if he will get it snipped then or if it is just to take a look & have a talk about it either way we are moving in the right direction.
As if my poor little man hasn't got enough to contend with. 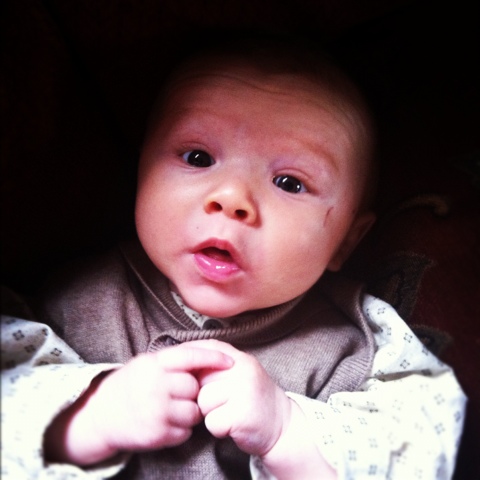