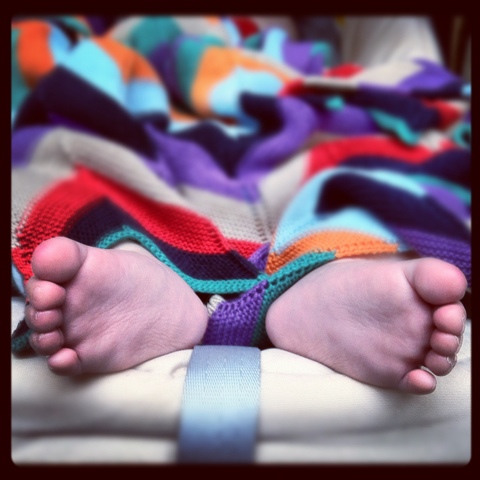 I cant get my head around it at all, Time seems to be going that extra bit faster than it did with Emilyn.
So the Classic "SO what can he do now?" question
Jheeze give him a break hes a baby i am enjoying him being a baby !
I say He can Smile, Giggle, Poop, Feed, Kick his legs in the air, grabbing his feet is a new thing & hes found his soft hair he loves stroking it, hes also very good & popping! he struggles to Burp it takes forever!...Oh & don't forget he is a chatter box babbling & cooing all day whilst hes awake, i love hearing him babble.
I have been told from Physios he may be slower at Crawling... he may be slower at walking But he may not be. Teething!... this is something i don't miss from Emilyn i forgot how horrid it is for them, he wakes & crys wont feed just crys, i know its his teeth though so get the teething gel out seems to do the trick at the moment.
one thing i have noticed is he wont bare any weight on his feet again though I've been told this is totally normal for a baby with Talipes apparently. things are so different to how Emilyn was but i am loving how different they are. Emilyn grew up so quickly in my eyes & now shes fully fully potty trained at night time too!
I am so totally Fed up with People Wishing the time away with their babies. "i cant wait for my baby to roll, I cant wait for my baby to sit, stand, walk, talk... you name it" so basically you cant wait for your baby to be a teenager & moving out... this is how you are wishing time away.
also the mums with two or more babies... "X was doing this already where as Y isn't...?" well each baby is different.
Also he is still no where near ready for weaning ( which i am also quite happy about ) i attempted to whilst he was having his 4 month growth spurt but he wouldn't even open his mouth. So i wont try again till 6 months or later he will tell me once he is ready.
By now Emilyn was doing lots & lots & eating two small pureed meals a day... But Hugo isn't, he isn't even rolling am i bothered NO!
I am loving having him as a baby i am loving being able to put him down on the floor & him still be there 10 minutes after.
Ofcourse i have no idea if he is like this because of his Bilateral Talipes or if he would of just been a lazy baby - actually i think its unfair for me to class him as a lazy baby. hes the happiest baby ever. c'mon hes been through a lot...
My husband wanted to get his Flat Head checked & the hospital rang up yesterday to book us in...i went along with it all... until he finished on the phone. i honestly cant see his head as a major problem & i cant be doing with any more backwards & forwards to appointments in London. Am i being selfish? I've been told by the time hes walking & sitting his head should rectify itself. i looked up "Flat head syndrome" on a website & had a good nosey at other babies heads & Hugo's is pretty good compared. I just feel he has been through enough. it would mean a Helmet for 23 hours a day & i just don't think i could cope with his boots & bars too. oh gosh i am sounding horrible! a mum knows best right?

its scary how quickly the time is going hes still breastfed & still waking on average 3-4 times a night i have just got used to being a Zombie mum. it would be so much easier to co-sleep but impossible with his boots & bars on we would just get kicked in the face... if any Mums with babies with Talipes have any co-sleeping tips i would very much appreciate!
I think he needs new boots he has a big red mark on his foot called a "pressure mark" i think this appeared when we had all that hot weather... & since has got worse we are back at the hospital in about two weeks so will discuss further with them.
since hes had his tongue tie sorted its delightful seeing him stick his tongue out i love it !
we are still battling this horrible sticky eye.. its now fully stuck together after every nap time & every morning poor thing i have to un-stick it & pull it apart. breaks my heart but i don't think hes too bothered he wakes up smiling... 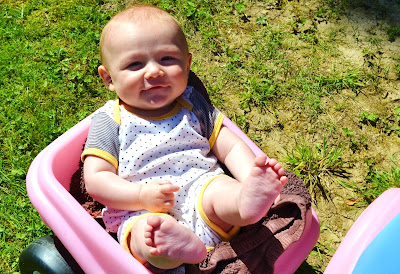