So what do you think of when someone says this word: Clubfoot?

A lot of people think this : 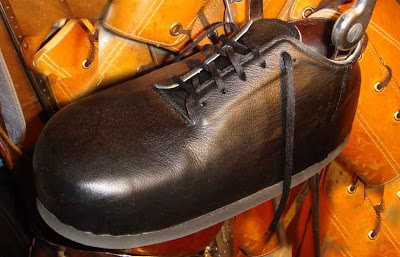 A person wearing huge "Ugly" boots for there whole life.
I feel the population has a varied view of this word. Some people even feel the need to mock it. To take the Mickey of the word. do these people even know what a clubfoot is?

Or do the people who mock the word feel it is acceptable to do so? So ignorant they do not care who they affect when talking about it?

I was astounded, annoyed, upset, a whole mix of emotions when i heard & watched a recent Television
Programme (Eastenders) watch from 26:40 http://www.bbc.co.uk/iplayer/episode/b01l8nkj/EastEnders_23_07_2012/

I as a mother almost cried for my son. As if life won’t be hard enough for him, that he will have to contend with Programmes mocking clubfoot.
if you can’t get on to Iplayer to watch the clip - it was when they were on the tube and were talking about the football match it’s what started the fight as Max Branning said something like Derek was useless because he had a clubfoot and he argued that he didn't he had fallen arches and then jack joined in mocking him and then they started fighting like it was something to be embarrassed about, I personally dislike the word clubfoot, i feel it is a non-politically correct term to use these days, i personally feel it is a very derogatory term to use,

In my eyes it’s like the use of the word "Spastic" would you use this word? No. Because it is wrong to.

The Writing for This programme is supposedly meant to be very pc and promote disabilities/disfigurements, but didn't seem it from that peace of writing.

My Talipes group made me aware of this "Hick up" in Easteneders & most of my 40+ members have written formal Complaints to the BBC.
I am just glad my Son is not old enough to understand or watch Eastenders.

He will be very aware of his Talipes as  I will explain to him as he grows up, i couldn’t bare to think how he would of reacted if he was a teenager watching it,

i think if he was old enough he would of probably of thought he was an Oddball & he should be embarrassed of being born with Bilateral Talipes???

The whole Stigma behind & around Clubfoot is just wrong, people seem to think it’s OK to take the piss out of it?

one example someone has recently asked "if anyone knew where to buy Trainers that didn’t make her feet look like she had Clubfoot," i found that very insensitive again making out it’s the worst thing in the world to have?! She knew my son has Talipes.

i know that when people ask me what’s wrong with Hugo's feet & i say he has Talipes they look confused & have to ask "Oh what’s that?" to which i answer "Clubfoot" just so they understand.

I’ve even had some people say "Oh like Forrest Gump" now i haven’t watched Forrest Gump so i have no understanding of the "Run Forrest Run" bit.

Do i take offence to this? Well yes i do. Of course i do, this is my son you are comparing to a film.

Either way I am incredibly proud of my son. yes he was born with Bilateral Talipes, Yes when i found out at my 20 week scan I was devasted. I thought it was the worst thing in the world. I thought it as "My son won’t be perfect" but oh my god how lucky am i? I have been given this chance to go through all of this, the experience & things i have learnt through my son amazes me daily.
The people i have met the friends i have made just because my son has Talipes.

I will be writing a full complaint to the BBC about Eastenders i really do think it is disgusting the way they made out Clubfoot was the most horrific worst thing in the world.

The writers should be very ashamed of themselves!

So to the writers of Eastenders should i feel Embarrassed my son has clubfeet?