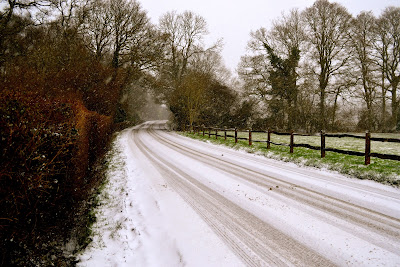 As you are probably more than aware last week in the UK came to a standstill with the amount of snow  we had... it just so happened that i had booked in Emilyn & Hugo to have their immunisations Hugo's 12 month jabs & Emilyn's 3 year 4 month jabs. we woke up to NO SNOW none what so ever. By 9am it was coming down thick & fast I had built up the anticipation for them both to have their immunisations today & we had no plans over the weekend so if they reacted badly we could still relax at home.

We also needed milk (not the panic buying for milk we had actually run out) I left for the doctors early in thinking we may get soon quicker then get home sooner before the road became an ice rink...
trying to park caused issues the doctors road is on a hill the road itself looked horrendous even walking down it was a struggle. so i parked on another road & walked to get milk & Emilyn chose some sweets that she could have after her jabs.
she chose winegums ... she has never had winegums so i had to sneakily buy some spare ones just in case.
I've been terrified about their immunisations more so for Emilyn than Hugo as she now understands more. I used to be awful whilst she had them done & for her 12 month one i think i just sent Mic with her I really couldn't handle it. but now i i feel like i'm a pro with things like this. i suppose its the bonus of Hugo having all his problems its made me 'man up' & as a mum you have to cope don't you?
specially now i have to do these things on my own.
Emilyn Loves the snow & Hugo didn't seem to understand it too much this is the second time he's seen it... last time was end of January or beginning of February last year i think, Hugo was only  a few weeks old... here's some of last years snow pictures. 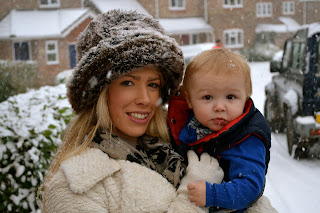 We had just parked up & got our Bugaboo Missoni all black addition out the car & put Hugo in all snuggled up Emilyn had her Snowsuit & wellies on & we were all set to walk down to the Doctors.
It was snowing A LOT & the roads were looking quite bad I just hoped we were seen quickly & we could then get home quickly. 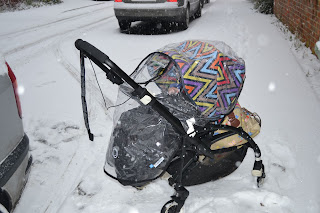 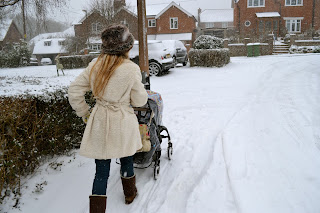 waiting waiting waiting Emilyn asking lots of questions about what will happen I tried to explain she will get a fluffy tickle in each arm, I didn't want to tell her it would hurt she seemed to like the idea that Hugo would be getting his jabs done the same time & it comforted her that she was a 'big girl' for having hers first.
The nurse was fabulous & got one of the Doctors in to help me hold her still.I think she was a little shocked by the first injection but we got the second done quickly & then the tears came & she was saying "oh that hurt you hurt my arm..." but within Minutes she was running to get Hugo to tell him "you'll be ok baby Hugo it wont hurt" bless her & poor Hugo needed 3 injections. He was great too he did cry but he was unfortunately crying even before the injections due to me (horrible mummy) not letting him down to crawl all over the floor. tut tut .
He winged a little after the jabs but he quickly cheered up with his Milky bar.
Then we walked back up the hill.

We then spent the weekend drinking Hot chocolates & playing in the snow.
Neither Children particularly reacted badly to the injections perhaps Hugo was slightly grumpier than normal but he looks pretty Happy here... 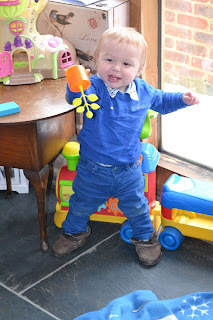 Snow time in the garden... 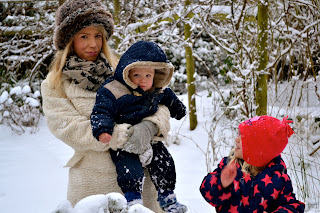 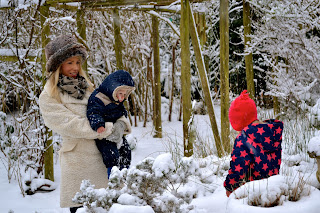 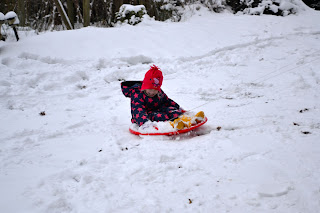 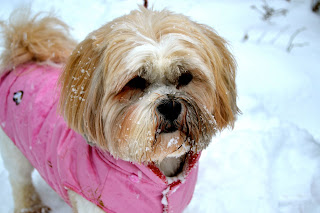 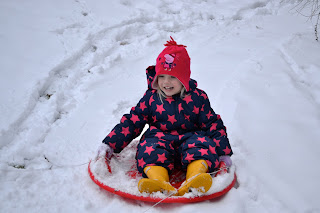