So here is Alex's Story from a Fellow Happy Feet Mummy

I didn’t find out until about 5 minutes after he was born. The midwife referred to this as club foot. I remember thinking “oh I remember Ronnie’s baby on Eastenders was meant to have that and her health visitor just shrugged it off when it disappeared- so it must just correct itself….no problem!”…or so I thought!
It was only when I returned home and I started researching the process that my heart sank! In my eyes my baby was perfect but I couldn’t believe the ordeal he was about to go through. I cried for about 3 days straight! I then pulled myself together and came across the Happy Feet Facebook page. This site offered me support encouragement and advice from parents in the same position and from those who had children further into the treatment. They offered a glimmer of hope. Although the process is long (taking about 5 years in total) it is non-intrusive; meaning no BIG operations and has an excellent success rate. They also pointed me towards STEPS charity. Who thankfully could send me some 'accurate' literature about club feet and I no longer had to rely on Google.....which only scared and upset me. Google images were the worst!! Thankfully though thanks to Bex and her blog there are some nice photos on there now; something to encourage new Mums like me.

The whole treatment was devised by a very clever chap called Dr Ponseti and it is relatively new in medical terms (about 30 years).  It all starts when your baby is about one to two weeks old. In Alex’s case he was only 9 days old. First of all a trained physio accesses the feet and scores their severity. 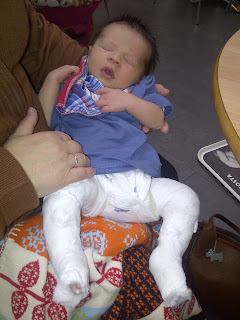 They then put casts onto the affected leg all the way up to the thigh (in order to prevent them slipping and little toes losing circulation). The casts are removed weekly (by soaking them in a 20 minute bubble bath…it’s alright for some!) and re cast, slowing stretching and manipulating the feet into the correct position. The first week he had them on; I’m not sure who cried more, me or him! But he soon got used to them and although there were tough days my friends on Happy Feet were there to offer me support and tips (like placing a rolled up towel under his legs to make his casts more comfortable.
We also had a few setbacks; Alex developed sores under his casts which meant he would have to go cast free for a week or so until it healed. This caused the foot to relapse and often we were back to square one. Although that week was so lovely....I did think to myself 'so this is what it feels like to have a normal baby'....I do hate myself for thinking like that as who is to say what is normal...but then again having a tiny baby in full leg casts and weekly hospital visits is not normal, but it was our normal, does that make sense?

After about two months Alex had to have a small operation called a tenotomy. This is where a surgeon cuts the Achilles tendon and places the foot back in a cast. As the babies are so young and their bodies are still growing the ends of the Achilles tendon (not sure of the technical term) somehow find each other and fuse back together.

Unfortunately on the day of the operation we were soaking the casts off as normal and as we were unravelling his tiny legs a strange yellow stain because more obvious on each layer we took off. Unfortunately this was an all too familiar sight. Another sore...and this was a bad one! It was a big yellow weeping sore behind his right knee; about the size of a 2p coin. And it STANK!!!! But worst of all I knew he wouldn’t be able to have the op. My heart sank and the guilt crept in. I am his mother I should have known...I should have trusted my instincts when I knew he wasn’t himself the previous week!! 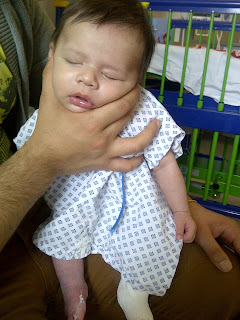 Luckily our consultant decided to go ahead with the tenotomy on his left leg and his right would remain cast free until the sore healed. The operation itself was really quick. We weren't allowed in with him (which I am selfishly glad about but I don’t think I could have watched) but he was back in my arms before my Costa coffee could even cool down to drink. 20 minutes was all it took to do the operation and re cast his leg. He was asleep in the nurse’s arms when we went down to collect him. PHEW!!! It was all over...until we had to come back a couple of weeks later and go through it all again on his right leg. Luckily the sore healed relatively quickly and he was back in a cast after a week and his foot hadn’t relapsed much thanks to the exercises and massages that we were shown by the physio. The next tenotomy went smoothly and we were back on track! Three more weeks of casts and then we were onto the boots and bar stage! (And I finally had legs and feet to play with!!) 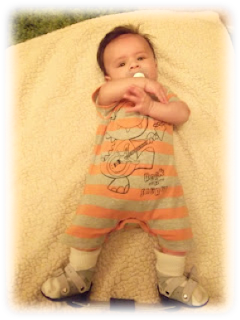 
The special Mitchell boots are fitted with a bar in between holding the feet into the correct position. Initially the boots have to be worn 23 hours a day giving us 1 hour off to bath, play and have a good old kick about! Luckily Alex doesn’t mind the boots too much. He loves nothing more than banging them on the floor (usually on my toes or hands) and sleeping with his legs in the air. My Mum thinks he is going to grow up to be a snow boarder.

After about 16 weeks we were down to nights only. It was amazing and he developed so quickly after that. Rolling over, crawling, standing and cruising and FINALLY walking!! He took his first wobbly steps in July this year (at 15 month) and started to walk properly at 18 month!!! I didn’t manage to capture those first steps on film but we were at the beach so I took a photo of his foot prints in the sand 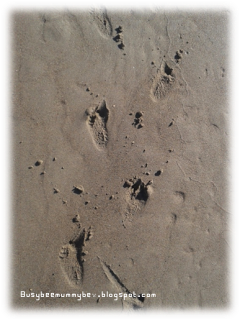 Thank you so much Catherine for sharing your story with us, I cried my eyes at parts, Reading someone else's story makes it feel all the more real for me.

*Keep an eye out for more Happy Feet Stories*