Not so Happy feet tonight...Talipes. Boots and bar poorly boy.

Do you remember my recent post about the need of a 'Baby free break?' the agonising guilt behind this post was awful.
The balance of being a Mummy, being a wife & having some 'me time' was taking its toll.
I feel guilty letting someone else even my own Mother having my children. I'm not sure why it's just apart of me. It may be because when I was little all I wanted was my Mummy. I hated being away from her. I was born like this, it can't be helped.
Well it was Half term last week. You may of noticed my blogging became non existent.
I'm poorly with Sinusitis damn you sinuses! On Antibiotics but they seem to be failing. I feel awful.
I am struggling with Emilyn at the moment, she's being a difficult 4 year old... I don't care what you say but 4 has been the hardest age yet. Terrible twos you're kidding me. That was easy!

I have been brought to tears in the last week with very unruly children followed by me feeling pretty horrendous.
I need sleep & lots of it. Unfortunately for me, my children haven't been sleeping well. I mean when have they? 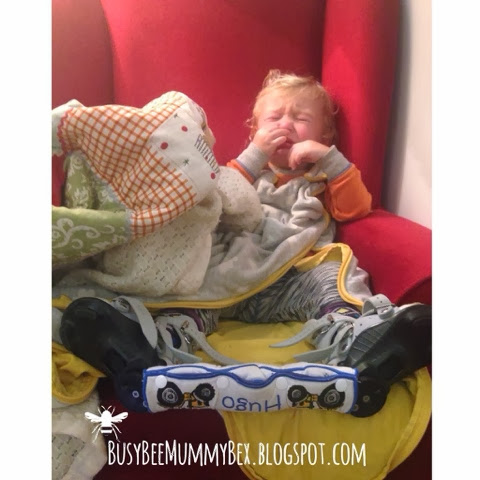 I had So much planned for this evening.. Mic was out. I got a new nail varnish my nails look shocking. so shocking I won't show you. I wanted to catch up with 'Trash TV' The children have been the hardest work to get to bed... considering Hugo hasn't had a nap today & Emilyn had a friend over after school. You'd of thought they would of been exhausted.
They finally calmed down about 7pm. Well that was short lived. Hugo woke up at 8pm grizzly.
I wasn't sure what was wrong he was sad, but didn't want a cuddle. I'm still feeling awful myself.
After a few minutes he was still crying... I asked if it was todo with his boots. He said yes.

Sad Hugo... I loosened his boots, but he was still sad.
This Ponseti journey is such a huge huge huge roller coaster. I don't know if his boots are hurting him or if he's poorly? or uncomfortable?

We did however have a break through last week when a friend picked up his boots and bar; Hugo quickly jumped in & triumphantly shouted "NOOO MINE MINE MINE BOOTS" That made me smile!

But one step forwards two steps back... seems to be the thing at the moment. Balls. Oh well only another 3 years & 2 months to go. Not that i'm counting!