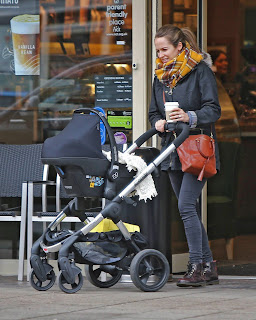 Kim Murray, the wife of Wimbledon winner and leading British sportsman Andy Murray, has recently been spotted strolling with the iconic iCandy Peach pushchair. The Telegraph were one of the first tabloids to share the photos, leading with the headline “Kim Murray’s new mum style is all about low key classics” whilst pointing out that Kim opted for “hard wearing quality pieces”.
This is the first public spot of the famous couple’s new-born daughter Sophia, since her birth last month. Andy, who remains active on the tennis circuit and is the current World number 2, recently finished runner up in the first Australian Open. With summer soon approaching, anticipation will build for the opening of Wimbledon, one of the British events of the year where wife Kim will be cheering on her husband. New father Murray, who won Wimbledon back in 2013, is now hoping to lead Britain to further glory in 2016.
The iCandy Peach will provide the perfect travel companion to wife Kim throughout the Great British summer event. The Peach is adept at manoeuvring the bustling streets of London, thanks to its smooth suspension and EVA tyres. The Peach is also free standing when folded with a large, extendable hood offering excellent sun protection with a 50SPF rating, Kim will have no trouble in getting to Centre Court to watch her husband in action, seeking a second Wimbledon crown.
As a proud British brand, iCandy are delighted that Andy and Kim Murray have chosen to sport the iCandy pushchair for their first child. Since 1933 iCandy’s precision manufacturing journey has led them to crafting the definitive pushchair, creating the world’s first single to double travel system with a single footprint. The award-winning iCandy Peach is famous for its one-hand fold and head-turning colours, it is iCandy’s bestselling model and is the choice for various A-list celebrities such as Victoria and David Beckham, Abbey Clancy and Sir Richard Branson. Understanding the needs of the modern day parent, iCandy have created unique elevators that elevate the seat higher and closer to the parent or world – Providing little Sophia with a great view of the tennis court. Designed and engineered to deliver a genuinely bespoke driving experience that draws on iCandy’s rich British heritage, this pushchair sets a whole new standard in the luxury pushchair class.


It promises to be a busy year for the doting new parents, with both Andy and Kim having extremely busy schedules to maintain. Andy, who spends much of his time out of the country, has already paid homage to his stylish wife for her energy throughout the pregnancy. With the tennis calendar well underway, and the three Grand Slams to come, iCandy along with the rest of Britain and his growing family will be cheering the Olympic winner on.  Please click on the following download link for images of Kim Murray and the iCandy Peach pushchair. iCandy have full rights to the images, please credit the company when using them: http://we.tl/yDOgjCBWcT
Posted by busybeemummybex