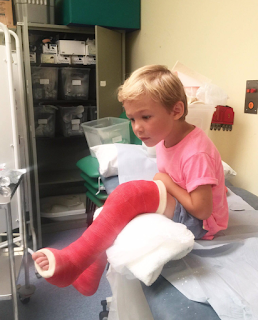 I apologise I never got around to updating the blog further with H & his casts.
Reason being: I've been under a huge amount of stress & exhaustion with it all.
After the second week of casts H had been in a huge amount of discomfort (I've never broken a bone nor been in casts before) so I didn't know if the itchiness was normal...
He screamed night after night day after day, pleading me to take the casts off.
I was non the wiser to what was going on.... until the day we went to have them removed.
Mr tickles (the machine) removed the first one & his poor leg was covered in blisters. Shocked at what we had discovered, I was tense just thinking about removing the second cast.
H screamed & tears rolling down his face, crying telling us all he didn't want his legs anymore.
The nurse called our physio who came over to the ward quickly & then sent us round to A&E to find out what was going on.
We had to go into quarantine because we just had no idea what it was.
Here are a couple of pictures of what we found... 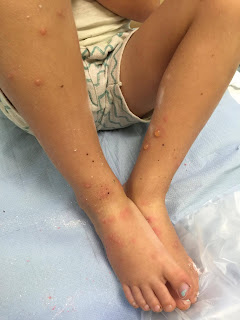 At first we thought he had a reaction to the plaster casts. Or a stranger thought was a mosquito had got stuck but in both legs seemed rather unlikely.
Now I know H has never been fond of the ponsetti treatment but this was taking it to the next level.
Baffled I had a good think about just what it could be.
OK so we have a dog & my parents have a dog... We've pretty much been dog owners our entire life.
However the last time I took my mums dog to the groomer, she told me that Molly (the dog) had harvest mites on her paws. This was the exact same timing H was in plaster casts.
After doing a bit of googling...."Harvest mites on humans" *boak* even the thought of them turned my stomach!
Well it would seem that a plaster cast is the most perfect environment for them. My poor poor boy had suffered a harvest mite invasion on both his legs.
Typically these horrible little mites are only around from August to mid October, H was casted August - September.
We have now successfully gotten rid of them from the dogs using coconut oil & frontline SPRAY!
Though googling these little mites it says they wont leave a dog for a human and  human needs to brush up against them wherever they live outside.... I'm not so sure how accurate that is. As H was in both leg casts he did play out on the garden (I suppose they could of been in the garden) but I don't know. We live next to woodland too.
I just honestly can't believe it happened to us & I wanted to post this to worn others that this is a possibility. My physios have taken pictures too & will be adding it to the lectures.
I know this isn't any of my own fault but my god did I feel like the most terrible mum, mum guilt riddled me and I couldn't bring myself to admit this is what happened to my boy.
Now I am absolutely beside myself with dread, what if he will need the ATT.... what if it happened again?
What if it wasn't the harvest mites, I mean we have a good idea that it probably was but non of us are 100% it was that.
We are back at the physio this Thursday, H has actually been pretty good at wearing his boots to bed now. Thank goodness. His legs are pretty scarred from the bites and blisters but his little feet are looking good!

When can my boy actually GET A BREAK!